After a couple of days rain in Norfolk we were raring to go again and chose this walk largely because we wanted to explore Blickling Hall, sometime home of Bono (according to Alan Partridge anyway!).  I'm always partial to a walk through a country estate and this provided a good opportunity of seeing some deer and a preposterous folly or two along the way.  This is walk number 14 from Pathfinder Guide vol 17 Norfolk and Suffolk Walks.
As National Trust members we were able to park for free at Blickling Hall but under a new system had to obtain a ticket first which wasn't very easy.  We then struggled to find the official onward path from the car park, a problem that we had elsewhere on this walk.  Eventually we struck out in what I took to be the right direction and found ourselves in the landscaped park.  All the attributes were there - a man-made lake; rolling countryside and large oak trees dotted across a park largely dominated by grassland.  Sadly we couldn't see any deer - I reckon they had made themselves scarce ahead of a music event that was scheduled to take place a few days hence.
Eventually we reached Great Wood and took the opportunity to leave the path for a few minutes to check out the mausoleum of The Earl of Buckingham.  As with so many mausoleums funded by unfathomly rich people this one was a testament to bad taste being a large pyramid  dating from 1793.  It was fun to find in the trees though!  We decided to head off in the vague direction of the original path rather than retrace our steps and found it after squelching our way through some pretty waterlogged conditions, not something you expect at this time of year.  Out across the fields we could see another of the follies in the park - this time Tower House.  I suspect that would be a fun place to stay.
We turned left when we reached a road and for half a mile or so we had tarmac under our feet.  The fields on either side were at different stages of harvesting and the clouds above were showing signs of parting to show us a bit of sunshine.  At the end of a lengthy straight section we crossed into the adjacent field and picked our way across a surprisingly swampy field.  The torrential rain that we had experienced during the last two days had clearly taken effect here.  On the other side we could see a bridge across the River Bure, by now just a trickle.

It was a relief to find dry land again at the edge of the field on the other side and we wandered across rough pasture to a corner that tapered into a gateway.  We went through and at this point we made a massive mistake in following the onward path.  Signage wasn't helpful and we picked our route based on the field boundary that we thought we needed to take.  We weren't to know but we picked wrong and even as the landmarks didn't seem right further on I took it that things had changed on account of the age of the book (this edition was from 1997!).  We passed by a mother and daughter who looked equally lost at this point and we swapped notes about our respective walks. Even when the ground got swampy again I didn't realise how wrong I had got.  It was only when we found ourselves back on the road we had come from half an hour earlier that the penny dropped!  It is very rare I go this wrong on a walk and I was really cross with myself.  Rather than retrace our steps through the bog we decided to complete the route by doubling back on ourselves and meet the official route later on.

A good mile of road walking followed and while normally I don't like doing this I have to say it was a relief after the poor walking conditions that had gone before.  Just after passing Blickling Mill we left the road and passed through a small tract of woodland and crossed the River Bure once more.  As we did so we met the couple we had seen earlier.  Both of us were now thankfully on track and we shared a joke about our experience as we passed each other.

We were now on the network of estate roads that cross the countryside here.  Off in the distance we caught the merest glimpse of Wolterton Hall - the guidebook suggested that we would have really good views of it.  I kept looking but no better views were forthcoming not helped by the large hedges that prevented any view in that direction.  I wonder whether they were as tall when the guidebook was written?  We had to make do with admiring the lodge houses on the edge of the estate instead.  Thoughts also turned to lunch and as we were as far from Blickling Hall as we were going to get we were praying that the Saracen's Head pub marked on the map was still functioning.  It is very difficult to tell now as so many pubs have closed in recent years, especially isolated ones like this.

Thankfully the pub was open to a cheer from both of us!  I am pleased to report that we had a very nice lunch and real ale to fortify us for the onward journey back to Blickling Hall.  Initially we had some road walking to do but at the edge of the next village we headed off across country again, with hints of views across the estates of Blickling and Wolterton, the adjacent country piles.  The walk back to Blickling wasn't hugely interesting although it was generally pleasant.  Perhaps it would be better during the spring or autumn when the colours are more vivid but on a dull August day it wasn't too special.

Eventually we got to the Park once more and preparations were in full swing for an outdoor concert due to take place in a few days time.  It was rather fascinating to see all the deliveries and work going on to accommodate I imagine quite a sizeable crowd.  It wasn't far past the showground to reach the lodge at the edge of the main estate.  This apparently is a holiday house - it looks smashing and worthy of consideration for the future I reckon. 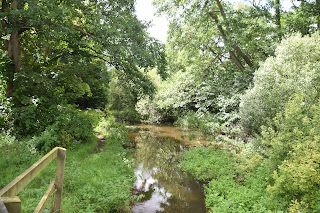 At the end of our walk the sun began to shine again and the clouds rolled away much as they had for the last walk.  All rather typical!  We did take the opportunity to look around Blickling Hall, which was once the estate belonging to Thomas Boleyn - father of Anne.  The earlier reference to Bono is of course a joke - Alan Partridge is a spoof local TV and radio host who wanted to impress a girlfriend by bringing her to the house.  As with so many National Trust houses this one has a long and varied history but perhaps the most surprising connection was with the Declaration of Independence of India and there was a fascinating exhibition detailing how Blickling came to be part of this slice of history.  It all revolved around a visit to the estate by Nehru and his daughter Indira and discussions at a party held here.  The garden was equally absorbing and we spent an hour or so soaking up the atmosphere outside.

As a walk we found this one a bit disappointing - I think we both expected a more scenic route.  Blickling Hall itself though was magnificent and we were very pleased that we made the trip.

Posted by Worthing Wanderer at 20:13